No Race of the Falling Leaves for Mallorca 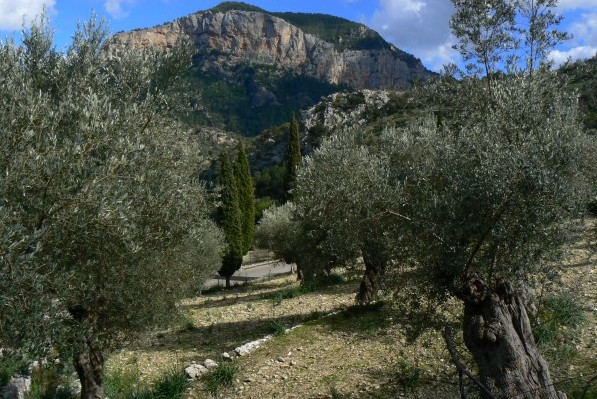 Last weekend saw the the Giro di Lombardia. The Giro di Lombardia is also known as “the race of the falling leaves”, and all around the UK at this time of year are rides calling themselves “ride of the falling leaves”. We’re back in the UK ourselves right now (working on logistics and marketing for the upcoming Mallorcan season), and on Friday I went for a ride, on the first morning after the wind had blown hard and pulled the leaves from the trees. On those sections where I was on a cycle path (and so there hadn’t been any cars to grind away the leaf-fall), I was accompanied by a “tssch, tssch, tssch” as I rolled along over dry oak, ash and horse-chesnut leaves. I realised that this is something one doesn’t really get in Mallorca, as there are fewer and smaller deciduous trees that drop their leaves each autumn. So Mallorca couldn’t host the race of the falling leaves, or even a ride of the falling leaves for that matter!

Mallorca does have a native oak, the holm oak (Quercus ilex–literally “the holly-oak”, an appropriate name since the leaves are a bit spiky, waxy, and deep green like a holly); but the holm oak is an evergreen, as are most native trees that one sees all over the island. Mallorca has two species of pine: the stone pine (Pinus pinea) and the Aleppo Pine (Pinus halepensis); both of these have culinary uses: the former is the source of pine nuts, the latter’s resin gives the distinctive taste and aroma to retsina wine.

The other common trees that cyclists see from the saddle in Mallorca all have culinary uses too: the carob (Ceratonia siliqua), from which the carob chocolate-alternative is made; the fig (Ficus carica)—the fig season is slightly early for our trips, as the figs are ripe in september, when one rides along roads lined with delicious fruit and pungent with the smell of fermenting fallen figs in the gutter—perhaps it’s as well we’re not there at this time of year as the mallorcan farmers don’t seem to have the same view of fruit overhanging the road being fair scrumping as in England; the olive (Olea europaea) is all over the island: in terraced fields on the mountainsides one sees olives trees that look impossibly old, with huge, half-vanished trunks, but which are pruned to yield new growth that produces the flush of olives (the ones in the picture were taken during a ride round the Orient loop); and the almond (Prunus amygdalus—the brain region the amygdala is so-named as it is almond-shaped)—it’s well worth timing your cycling trip for early to mid feb, when the almond blossom is beautiful on the island.

All these trees make up the beautiful countryside that await cyclists heading to Mallorca, but they can’t supply the pleasant “tssch, tssch, tssch” an English autumn ride can give, but on the other hand, these mallorcan trees save our cyclists from the greasy brown slick that coats the road in England after the first autumn rains.