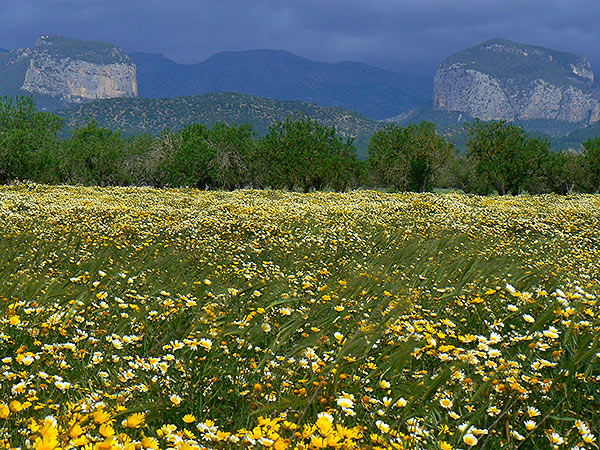 This has to be the nicest little cycle route in Mallorca. Whichever way round you do it, the climb through Orient involves one major climb, but two passes. From Alaro (at 200m) you climb up between the dramatic sheer cliffs of the “top hats” (as we call them—the twin peaks of the Puig d’Alaro and the Puig de s’Alcadena), to the first pass—the Col D’Orient (500m)—before descending to Orient itself (450m), which sits in a beautiful hanging valley. A mere hamlet, Orient has two cafes; we prefer the first, on the left as you enter from Alaro-they have a big patio outside and do great cake.

From Orient, heading out west towards Bunyola, you cross the hanging valley and climb the hairpins to second pass—the Col D’Honor at 550m, before descending into Bunyola (320m). Either side of the Col d’Honor is steepish (8%), narrow, hair-pinned, and quite rough (the tarmac’s old and the tree-roots are cracking the surface), so take care going down to Bunyola; you arrive right in the middle of the town square—perfect for coffee (or fresh fruit if it’s market day).

The Orient loop is really worth doing from both directions: the feel is quite different each way. If you’re only doing the route one way, do it from Bunyola up to Orient and down to Alaro: that way you do the climb to the highest point in one go (for maximum effect), and you are going up the long rough road of the Col d’Honor, and down only a short rough descent from the Col d’Honor into Orient; but then you get to enjoy the smooth, wide, fast road from the Col d’Orient down into Alaro. This ways round, you also have the dramatic feeling of leaving Bunyola up through the steep and narrow streets from the square (reminiscent of this scene from La Course en Tete, where Eddy Merckx climbs in his imagination while training on his rollers; look at about 2 mins in for the steep climb—from the Tirreno Adriatico race, perhaps?)