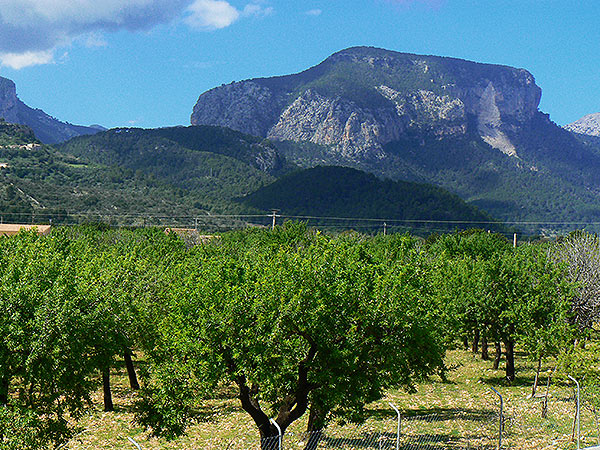 The Cami del Muro is a 30km stretch of small lane, almost dead straight from Santa Maria to just short of Sa Pobla.

“Cami” doesn’t seem to be a Spanish word, but is used all over Mallorca to mean road; “muro” means wall in Spanish. With the name “the road of the wall”, it sounds like it should be a steep climb; after all, remember the the tradition (made famous to cyclists by the Tour of Flanders race) of calling steep climbs “walls” in Belgium, such as the Muur van Geraardsbergen (Mur de Grammont in French). However the Cami del Muro is flat, wonderfully flat (it’s called “del Muro”, just because it heads to the little town of Muro, south of Campanet). It deserves a mention on this site, and deserves to be known by every cyclist visiting Mallorca because it is so useful as a way of connecting routes and completing the circle on many a cycle route in Mallorca

It runs from Southwest to Northeast, following the south side of the mountains, but unlike roads like the Alaro to Lloseta road (which traverses the rolling southern slopes and so winds around, and climbs and falls), the Cami del Muro is on the plain, and is dead straight and dead flat. Cyclists who don’t know about the Cami del Muro ride along the main road from Santa Maria to Inca on the Ma-13a, but those who know take the Cami del Muro.

The Cami del Muro is a great way to complete any loop that has its upper part over the passes of the mountains: such a loop should have its lower part on the Cami del Muro. For example, leave Campanet and climb through Selva to Luc, turn left at the top and ride down and up over the next pass below Puig Major; then down into Soller, then over the Soller pass to Bunyola. Zoom down through Santa Maria, leaving town on the Ma-3020 and taking the left fork onto the Cami del Muro. Then you’ll be blown along by the afternoon tailwinds all the way home (afternoon south-westerlies are quite common in the winter here). The Cami del Muro takes you virtually to Buger, where you turn north to cruise the last 3km home. That’s a 110km day, with three big passes—just as well the last 40km consist of 10km gently downhill from Bunyola to Santa Maria, then 30km flat with a tailwind along the Cami del Muro!