Sometimes it’s worth waiting, if the result is perfection 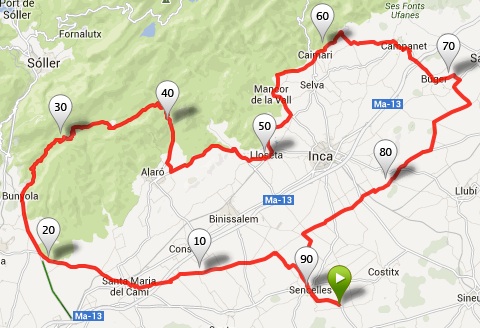 Yesterday I set out with the intention of doing this 95km route. We had meetings booked later in the morning, so I set out with lights before dawn, thinking that by averaging 25km/h with no café-stops I could be back by 10.30 or so. Pushing hard through the dark into a headwind created the illusion of going faster than I really was. I rolled through Bunyola in rather grey daylight, resisted the cafes, and headed up the narrow climb from the square towards the Col d’Honor and Orient. The storm that had hit Britain on Saturday night then blew more gently over Mallorca during Monday night, and as I climbed I could tell I was the first vehicle up the pass that day, from the unbroken twigs that littered the road from the night’s winds.

The climb up to the pass is steady: almost 6km at rarely more than 5%, but near the top it was noticeably cooler, and a fine drizzle was falling. By the time I’d crossed the hanging valley and past a sleepy-looking Orient village, it was raining properly, and I descended in what I call ‘welsh rain’—not mere drizzle, not a downpour, but properly wet. By the bottom at Alaro my shoes were soaked, and though I continued to Llosetta, I was ready to cut home early from there. Quite often in Mallorca, it might rain in the mountains but not on the flatland that makes up the bulk of the island. As I crossed from Binissalem to Sencelles, all was dry (except me) and had I planned things better, I could have had a more comfy ride (it’s our task here to make sure you pick your day’s riding in the light of the weather forecast). Little did I know as I rode home early that this would be part of the story of the perfect cycle ride in Mallorca. 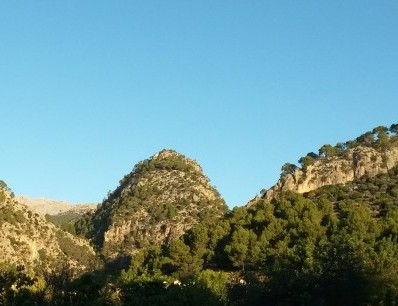 This morning—a day later—the mild clear morning tempted me out again at 6.30, and by dawn I was back on yesterday’s route from the point where I’d cut home early. Leaving Llosetta (pronounced ‘yosetta’—remember the double-l is a y-sound), I rode north to Biniamar (hidden behind the 50km flag on the map). I was instantly glad to have waited the extra day to ride this section, as it brought perfection: this was perhaps the most beautiful stretch of road I’ve ever ridden. It’s a lovely road under any conditions, gently rising with the giant form of Massanella (Mallorca’s 2nd-highest peak at 1365m) only 6km away right ahead of and above you. Today though it was extraordinary; firstly because the road has been resurfaced (cycling is a unified aesthetic experience—sight, sound and smell were joined this morning with the feel of the silky, pure-black tarmac), and secondly because the sky was red with the new sun just behind me over my right shoulder, casting a pink cross-light over Massanella’s south face. I forgot I had my phone with its camera, so the pink dawn had passed by the time I took this shot (looking north from Caimari), but this half-hour in pink was perfection itself.

The perfect tarmac continued through Biniamar to Mancor de la Vall (not to be confused with Manacor, in the south-eat of the island), and the view was further augmented by the monastery of Santa Lucia hanging on the hillside above the town below Massanella. Arriving in Caimari, I was overtaken by a local club-rider (out before work, it was still only 7.45); he turned up the pass towards Lluc, I though continued to traverse the mountains to Campanet. After café con leche in the square, it was time for home—down to Buger and back along the cami del muro. The ride had had 30 minutes of perfection, so I wanted nothing more, but perfection was made better by the fact that rolled back from Campanet under a cloudless pure blue sky, and arrived in Sencelles at 10am in 25° warmth; this is the view past the potato-fields of Buger (the village on the hill) to the peaks beyond.

Not every ride in Mallorca achieves such perfection, but we’ll work hard to get you close in your week here with us.