Descending with Team Sky in Mallorca 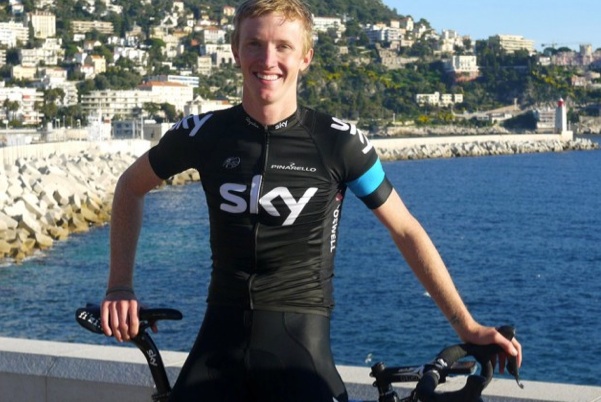 Sometimes its the things that we cannot arrange for a client that just happen to make their cycling holiday in Mallorca unforgettable. Today I was guiding a client—Steve; we had had to turn home early—before we’d completed the descent to Sa Calobra, and so without getting to do the whole climb back out. Though the decision had been his (and I thought it was the right one—his deep-section Lighweight rims weren’t right for the gusty conditions on the Sa Calobra side of the mountains), I could sense Steve was frustrated as we set off and he straight away pushed it really hard towards home. He drove it up the last bit of the climb back along the ridge, and then continued full on the power even as the road sloped down towards the pass and the turn (left down to the Lluc monastery and Pollensa, or right down to Selva and Inca). 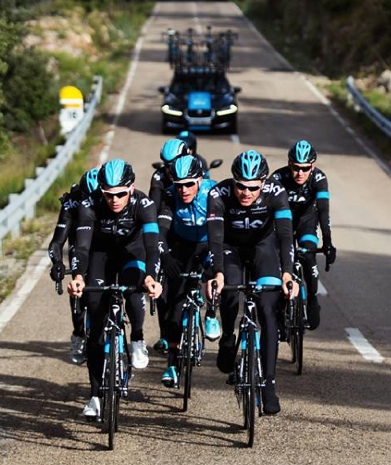 Digging deep to keep up with him, I just got close enough to see that he hadn’t gone the wrong way. I also saw that he wasn’t stopping at the petrol-station lay-by to put on his jacket for the descent. I let him go, and stopped to put on my gillet. As I pulled out, the Team Sky car went by—I wondered whether their riders were behind or ahead of the car (the latter’s the more common), and off I went without thinking more about it. At the bottom, on the long beautiful straight road to Selva, I saw Steve waiting—all the frustration had gone, to be replaced by exhilaration. He’d done the whole descent tacked onto the back of the Team Sky peloton. Richie Porte was the wheel he followed, and Wiggins was on the front of the group. Awed by the way they went around the hairpins two abreast (and hardly needing to cut accross out of their lane despite the speed), he was dropped a little around each turn, but Ian Boswell (starting his second year on the team), waited back a little for him, gesturing him back onto the group. They chatted all the way down (Steve’s asking Boswell “are you guys the real Team Sky?” proved to be the perfect ice-breaker). We couldn’t have fixed the encounter better even if we’d been able to fix it at all: everything just was timed perfectly for Steve—that he happened to whizz past the lay-by just as they were pulling out, that Boswell happened to be on the back and was so willing to talk, that he had his encounter with Team Sky on a descent—as Steve himself admitted “the one place I had a chance of keeping up with them”!