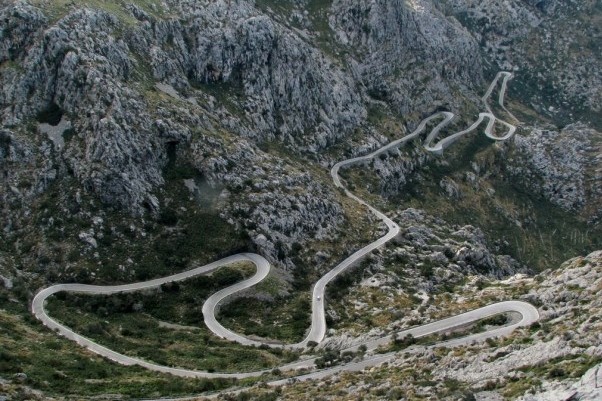 The title of this post is a little disingenuous: there aren’t three routes to Sa Calobra: there’s only one route—down to the sea and then up the way you came! That’s one of the reasons it’s so hard, I maintain, and so one of the reasons you should do the ride at least once in your life!

The cycle ride to Sa Calobra is the highlight of most cyclists’ visit to the island—those who come wanting challenge at least! It’s most likely that this will be the hardest day’s riding of your holiday with us, as there are three factors that combine to make sure that whatever route you pick, the route to Sa Calobra is no easy day, but the views as you descend, the smoothness of the tarmac and the sweep of the hairpins make this descent worth the effort of climbing back out, and worth the big day in the saddle.

The first fact that makes this day hard is that you descend all the way to the sea, so unlike other climbs (such as the Col d’Honor at Orient, where you start climbing at 200m altitude), when you climb back out of Sa Calobra you climb from sea level to 700m in one go.

The second fact that makes it so hard is the fact that there’s only one way to Sa Calobra! From where you turn off the main road it’s an out and back of 26km, so that’s 26km you have to add to whatever route you are doing from your base. The third fact that adds to the difficulty of any day to Sa Calobra is the fact that the turn to Sa Calobra is already on the far side of the mountains, so you have to climb to descend to Sa Calobra to climb back out. Sa Calobra day cannot be a short day—and it cannot be a one-climb day! There are basically three roads to the Sa Calobra turn: from the south (up from Caimari, then turn left at the top of the Col de sa Batalla); from the west (the big climb from Soller through the Puig Major tunnel); or from the east (up the more gentle climb from Pollensa old town). For this blog post I’ve drawn up a route for each of these ways up to the Sa Calobra turn-off; they are also three routes of different length and difficulty—79, 138, and 96km respectively. 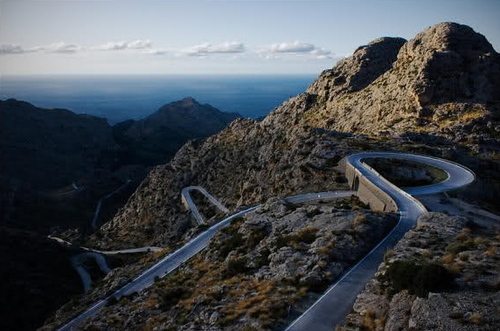 The shortest way to do Sa Calobra is out-and back. Leaving from our Campanet villa, heading through Caimari and up the Col de sa Batalla and left towards Puig Major takes you to the the Sa Calobra turn-off in 25km. From where you leave the main road, it’s actually uphill for the first 3km, then downhill for the next 10. The famous 270° hairpin comes quite early—after about 1km of the descent; the view of the road to come (and sometimes the sea) is extraordinary. Keep going down (turning right at the fork to Sa Calobra cove itself), then stop, turn around and just do it in reverse!

If out and back doesn’t appeal, then this route heads east from Campanet, through Pollensa and up to the Sa Calobra turn-off from the east; on the way back, it dives straight back down south to Campanet, giving one the feeling of doing a loop. The ride is 96km long—medium length. If 96km doesn’t seem enough, though, then one could always do this 130km route for a rather epic day in the saddle: west from Campanet to Alaro; over the Orient pass to Bunyola; over the Soller pass and right up to the Puig Major tunnel; then Sa Calobra and finally down the Col de Sa Batalla home to Campanet  (map, profile and gpx to follow).