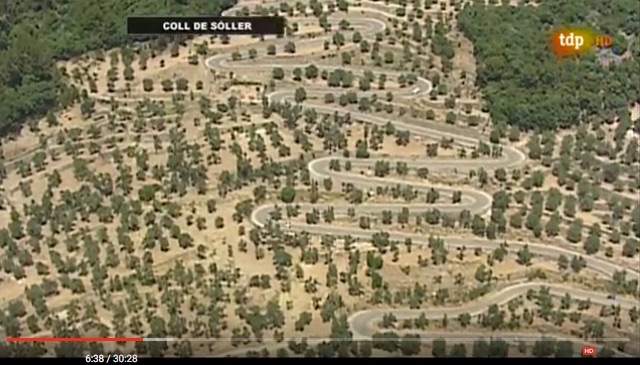 The third stage of the the Challenge Mallorca pro race was the most mountainous. You can see a 25 minute highlights video here. It’s long enough ago now that I am not going to try to keep the winner a surprise: as the title of this post reveals, Cancellara won (the video kind of misses how he did it; you see him in the big breakaway group a few times, like at 14.00 minutes-in; then you see him attack just after summitting the highest point of the day, 24.10 mins-in; but you never see him overtaking the little break of three that was ahead of him—oh well).

The route shows many of the best mountain roads on the island: roads which you’ll ride if you take a holiday with us. The race started in Port de Soller, and climbed south over the Coll de Soller (the climb starts 5.33 mins-in; they summit at 6.25 mins-in; and descend until 7.15; the pic is a screen-shot of the helicopter view of the descent, at 6.38 mins-in). The Coll de Soller is a must-ride route (since the cars go through the tunnel, it’s a traffic-free mountain pass), but the two most common places people stay in Mallorca for cycling holidays put it out of reach: from Port de Pollensa/Alcudia area it’s over 60km to the base of the climb; from Palma Nova in the west it’s about 50km. That highlights the benefits of not using a company that puts you in an out-of-season seaside hotel: stay with us and you’ll be near the best routes. From our hotel or villa in Alaro, it’s only 17km to the base of the climb.

Once down the Soller pass, the peloton turned west and then north up the climb to Valldemossa (one of the best lunch-stops on the island—they go through the town at 10 minutes-in, and you can see the lovely view of the town above you that greets you as you climb to it this way at about 10.20 mins-in). Heading west over the Coll D’en Claret (499m high), they descended through Esporles (13.00 mins-in). Our clients often do this route the other way, as I think that the quieter Esporles road is nicer to do as a climb and the busier Valldemossa one better as a descent.

The peloton then took in the lovely Coll D’Honor, part of the Orient Loop. They climbed it the way I think is better ascending from Bunyola (on the smaller, rougher road, see from 15.00 to 16.15 mins-in), descending a little before crossing the plateau to the village of Orient (see 16.55 to 17.40 mins-in; you see them pass the cafe on the left—we actually prefer the one on the right that you don’t see). then down the fast road to Alaro. The Orient Loop is the home climb for our Alaro clients—at 35km, it’s an amazing ride that can be fitted into the half-day of arrival or departure day.

Next is the Coll de sa Batalla, so familiar to everyone who stays in our Campanet or Selva villas. The peloton passed about 200m from our Selva villa (see 18.45 mins-in), then climbed to Caimari (19.40 mins-in, familiar to all our Campanet-based riders and part of the little warm-up tune-up ride they often do on the afternoon they arrive).

After passing the Coll de sa Batalla summit (21.30 mins-in, with the petrol station and cafe at the top), the peloton turned left towards the turn to Sa Calobra and on to Puig Major—the highest road on the island at 995m, see 22.43-23.40 mins-in for the two tunnels and the lakeside road at the top).

Cancellara attacked on the descent to Soller, passed the three-man break somewhere, and then soloed to victory on the climb to Deia. This last climb they labelled as the Coll D’en Bieda on the profile—a name I’d not heard of.