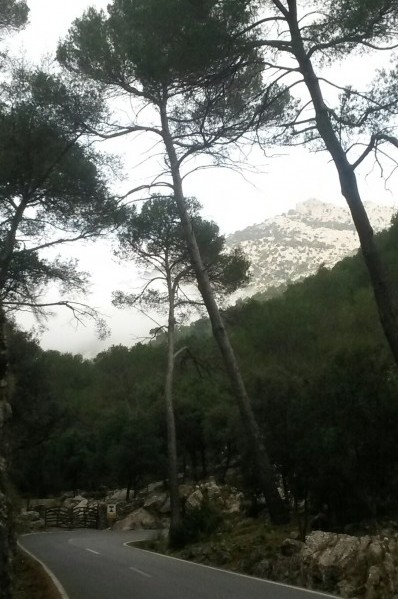 If time is tight, the climb up the Col de sa Batalla is a perfect morning workout from Campanet. For me it’s a good ride to squeeze in before getting down to the day’s work, for some clients it’s a way to get in a hard workout before going out again with one’s holiday companions for  a (gentler) main day’s ride. It’s 15 mins warm-up to the base of the climb in Caimari, 30 mins or so up the climb (though the Strava record is 17 minutes!), then 30 mins to come down and home. This morning was the second of two cloudy and misty mornings, and so setting out at 8, it was knee-warmers, short-sleeve shirt plus gillet and long-fingered gloves. But the morning was warmer than it looked, and the gloves and gillet were off and stuffed into a back pocket—pretty remarkable for 10th of Jan!

By 1/3 of the way up the climb, though, I was starting to ascend into the cloud, and back on went the gloves—this operation could be done riding no hands, so the Strava time wouldn’t be compromised. I continued up at a nice steady pace, locked in the private world of the rhythm of my own breathing and the movement of the pavement under my front wheel. Occasionally the clouds would part and a glimpse of the mountains above me, or (at the next hairpin) the plain below would open out, but stopping for a photo was out of the question—my rhythm had a pleasant necessity that couldn’t be broken. Then, into the private world of concentration, breathing and effort came a sound—faint and distant music. Only half wondering where it came from, I built the music into the pattern of my breaths, and continued. 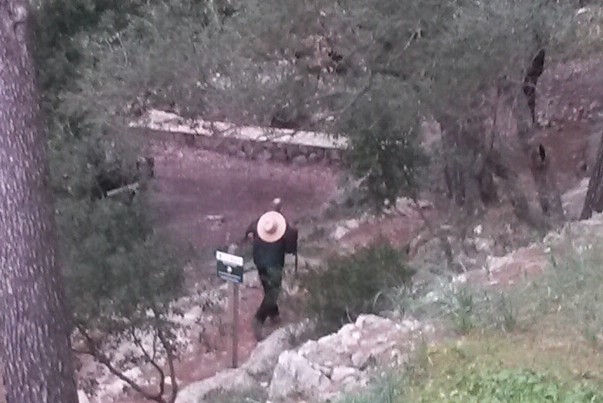 Then, turning a hairpin, it seemed to get louder: “is it was above me, no behind me—is it bagpipes?” I was finally drawn from my own private world: “damn, the radio on my phone’s on, and I’m paying data charges to hear bagpipe music!”. The rhythm and the Strava record-attempt broken, I stopped, pulled out my phone and put it to my ear—yes, bagpipes! Not coming from the phone, but from behind those rocks. The clouds parted again and I got a glimpse of a peak above the trees; since I had my phone out, this time I took a pic. Suddenly, the pipes were close and no longer above me but below. I looked over the stone wall edging the road, down the mountain, and there he was—almost running down the hill, bagpiping as he went! I don’t know if he’s a local, or a Scot on holiday (he had an impressive sun-hat for such a cloudy morning); I’ve not heard him before, but will keep you posted!