The best cycle ride in Mallorca 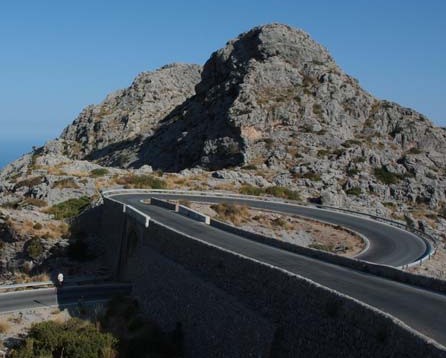 Is this the best cycle ride in Mallorca? It is the most challenging day’s riding one can have in Mallorca, without a doubt. The Sa Calobra descent and climb feature as the centre-piece of the ride, but in terms of length and altitude-gain, it isn’t the the biggest challenge: that honour goes to the climb up to Puig Major. In the legs though, I find that it is Sa Calobra that hurts rather than Puig Major on this route. The climb up to the Puig Major tunnel is longer and steadier than Sa Calobra, which is more unrelenting and consistently steep; because you’ll already have done 100km and some tough climbs before you U-turn to begin the ascent out of Sa Calobra; this is the climb you’ll remember from your epic day. The beauty of the Sa Calobra climb makes it all the more memorable—you get to combine your suffering with an extraordinary landscape and the feel of having the mountains ahead of you on a road that drops into the sea behind your back wheel.

Look at the profile and the challenge is obvious: the climb to Orient is not to be sniffed at, but on this profile it looks insignificant (it’s the first Category 3 climb); likewise the famous Soller Pass is the mere blip of the second Cat 3 climb. The climb up from sea level in Soller (at 56km) to the highest point will take the zing from your legs, leaving only determination and inspiration to get you up from your second descent to sea level at Sa Calobra (the 92 km mark!). ONce you’ve made it to the top of Sa Calobra, descended a little and rejoined the road from Soller at the point you’ve turned off, you’ll have only 25km to go til home—the first 5 of which undulate a bit but the last 20 are all downhill.

Here is Cavendish on the climb almost two years ago now—as the new world champion beginning his spring training for the new season with a new team. The shot was taken by Kurt Asle Arvesen (team sky coach) for Michael Barry, I think, and it’s a bit wonky as it makes Cavendish look as though he’s descending, not climbing. Look at this blue sky: it’s the 10th of January! Barry’s blog doesn’t say what route they did that day, so I don’t know whether at this moment Cavendish is thinking “this is surely the best cycle ride in Mallorca!” or not—we can only guess! Whether or not Team Sky ever did this route; I am sure you’ll agree that it’s one of the best 130km you’ll ever do on a bike! Why not fix this now in your mind as the highlight and final challenge of your week in Mallorca? Here’s the map and the gpx file for you (click ‘download’ at the bottom of the page):